Living aboard the Hoppet

When Stefan says goodbye to Luisa and me, she takes a walk around in the harbour and already finds a place to sleep. The schooner's name is "Hoppet" and it has been built in 1927. 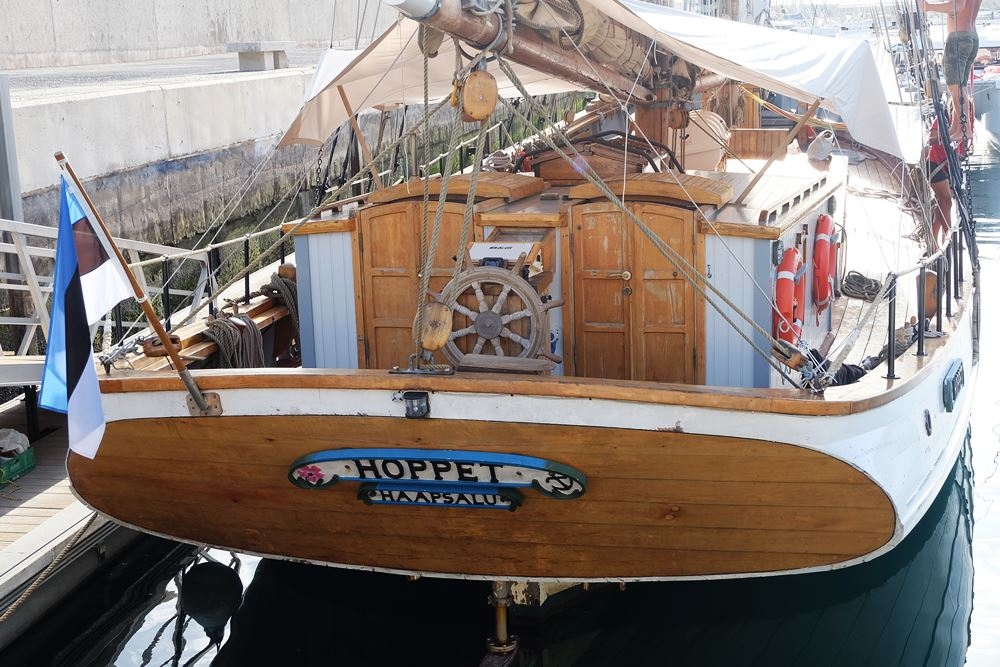 It is one of the last Estonian sailing vessels of its kind. The new owner Alar bought it together with a friend after a Finnish shipyard restored the haul, deck and rigging. So he took care about the interior design, since Hoppet has been used to carry loads and goods in the past. Now there are enough bunks for 20 people and a fully equipped kitchen. 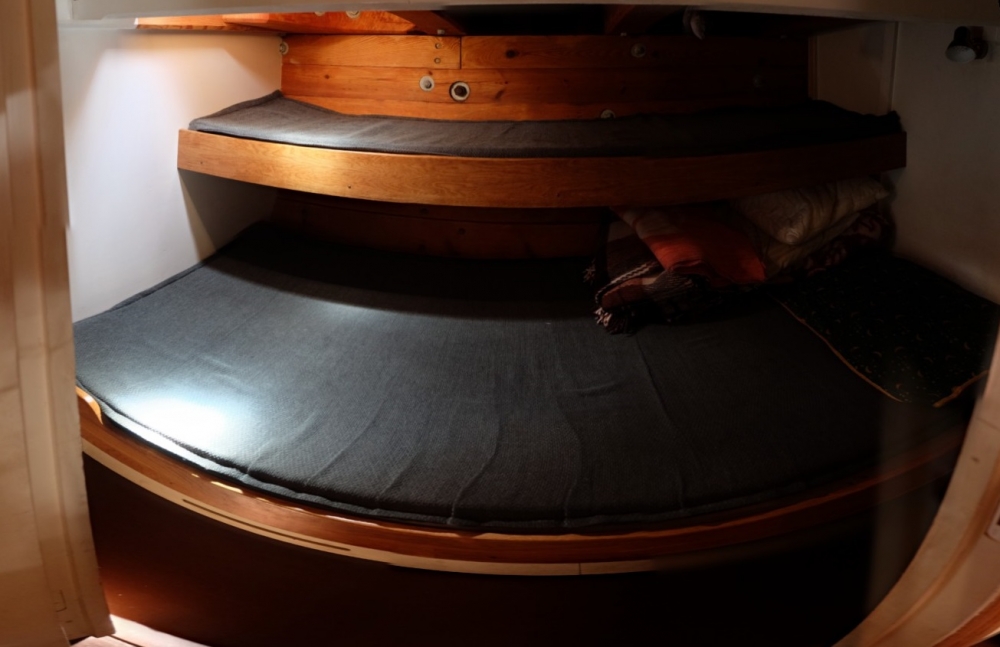 Luisa and me shared a bunk like this for two weeks. 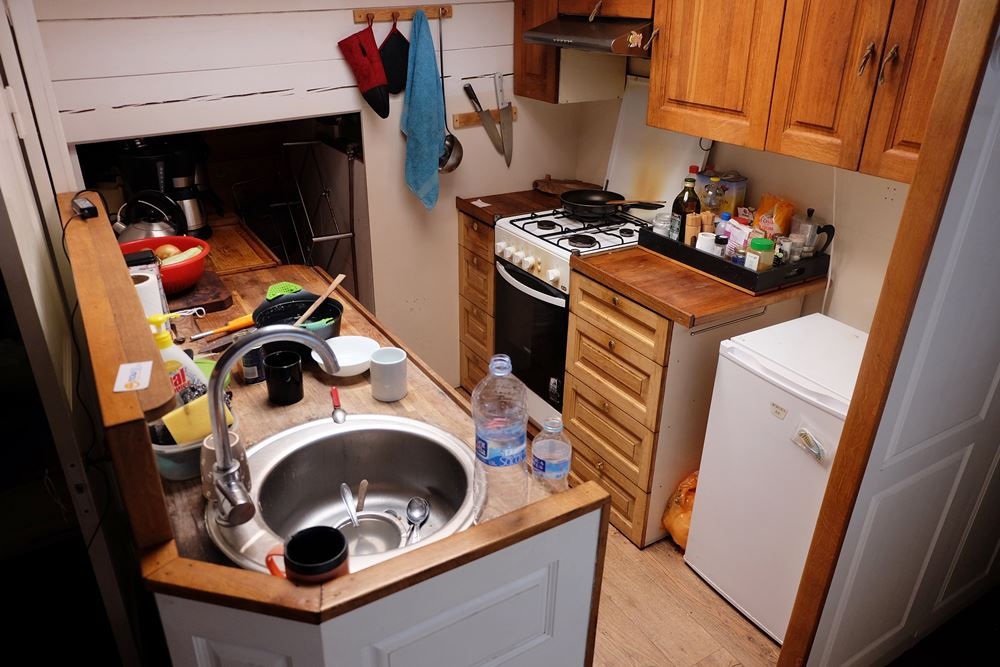 In the galley there is not only a gas stove, an oven and two fridges; they even have a dishwasher!

For a small contribution we can stay on the ship. This gives us the opportunity to stay in the harbour and ask for boats going to the other Canary Islands or the Caribbean. We don't even have to pay for the days we are helping out with sanding, oiling and painting! And all that due to Alar's great generosity, because it's quite a big financial task to maintain such a big ship, that is only privately funded. But he comprehends our situation being long-term travelers with a very low budget. Siim is in his early twenties and has been working aboard for more than a year now. Not does he only know which line corresponds to which block and sail, he also knows every inch of metal and wood, since he is constantly sanding, oiling or painting every part of the vessel. 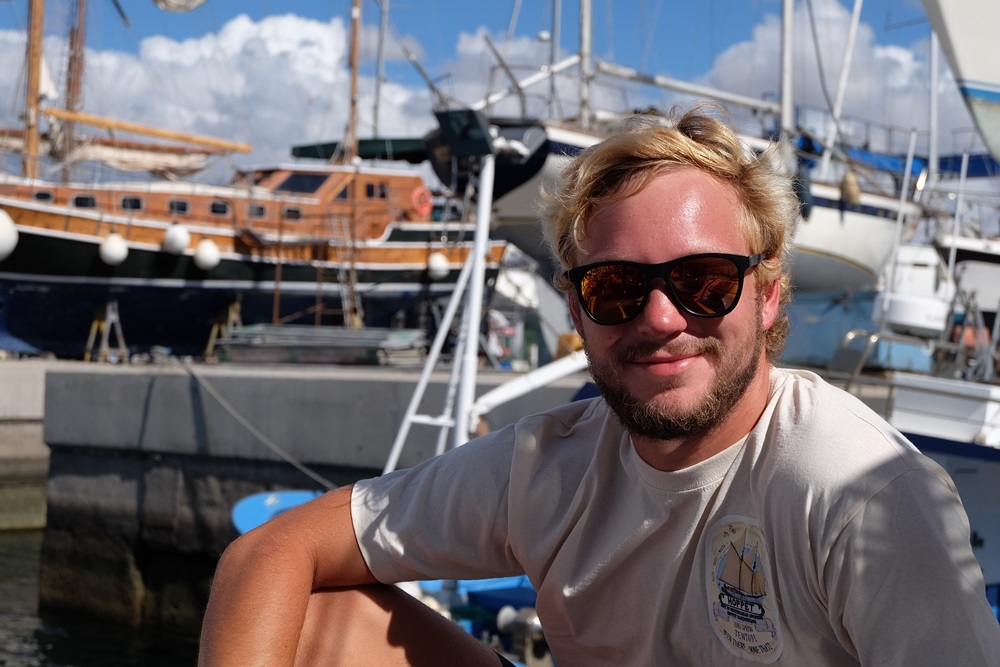 The second crew member is Udu. No one speaks louder and talks more than him. He has got a infinite source of energy. Given that he is always in a positive mood, it's not hard for him to keep the guests aboard entertained. 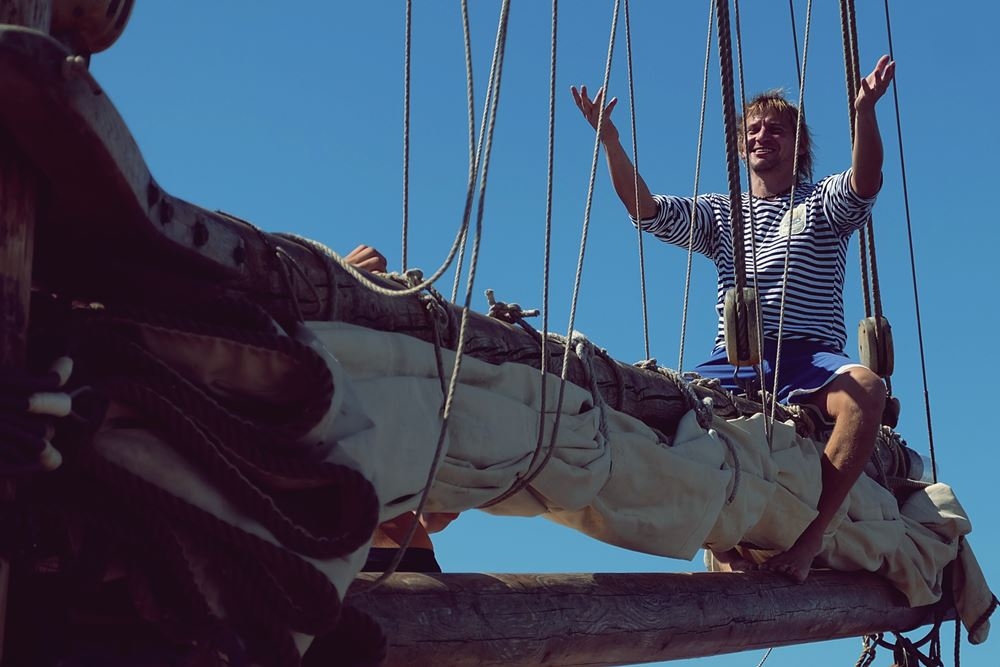 And then there is Ain, the captain. I would describe his character as not flappable at all, but neither very chatty. Unless he had a few shots of rum. Then you can learn some crazy and interesting things from him, e.g. in the 1980ies he was working in a secret place in the north of Russia (Soviet Union) to take care of the submarine's nuclear fuel. 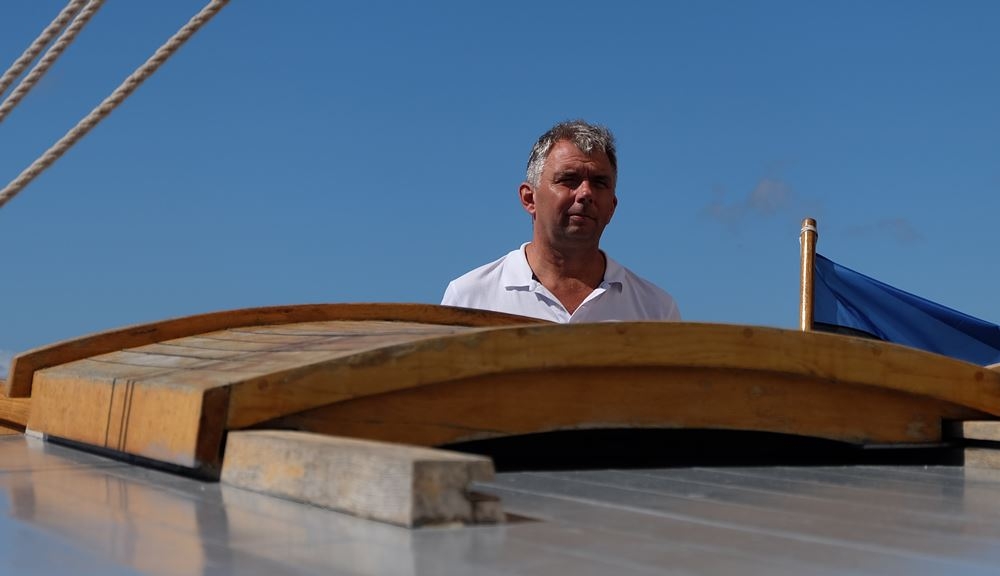 On a sunny Saturday, Alar invites nearly every Estonian who is currently on holiday on Tenerife to spend a day on the ship. In the morning the crew makes pancakes for everyone and in the afternoon we are sailing on the sea for a few hours. It is astonishing, how much work it takes from the sailors and volunteers to hoist the sails on a traditional boat like this. Eventually it's all manual labour since there are no winches which would make it way easier to pull the lines. 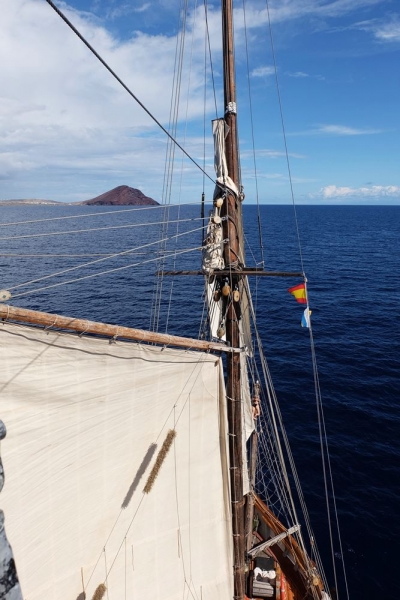 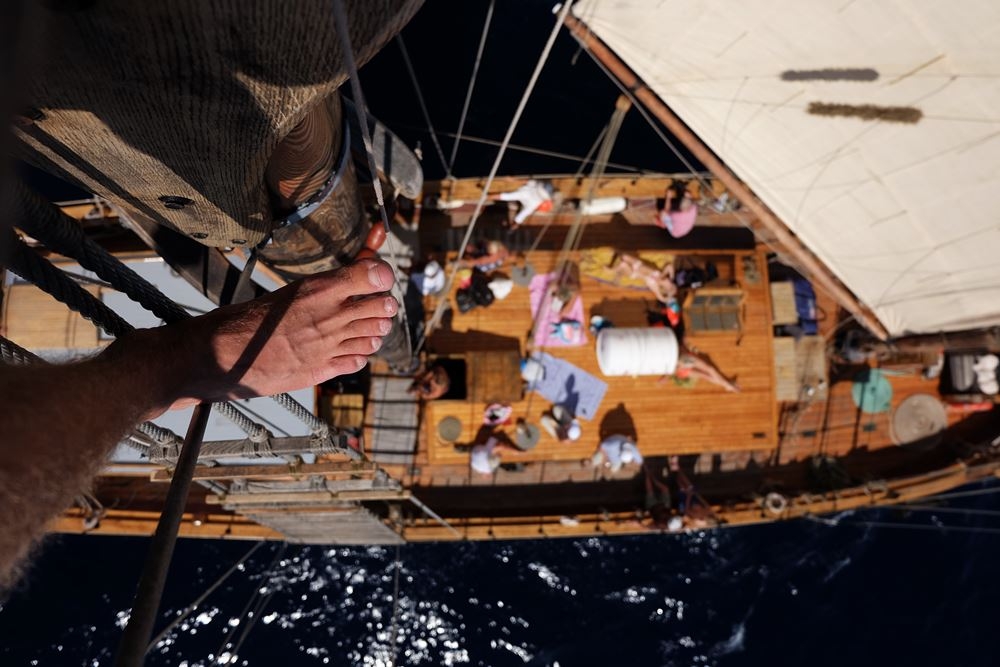 And when the sails are set, Siim allows me to climb the mast. What a great experience - when the weather is good. I don't even dare to imagine how it would feel like having to solve a problem with the main or top sail in a storm. 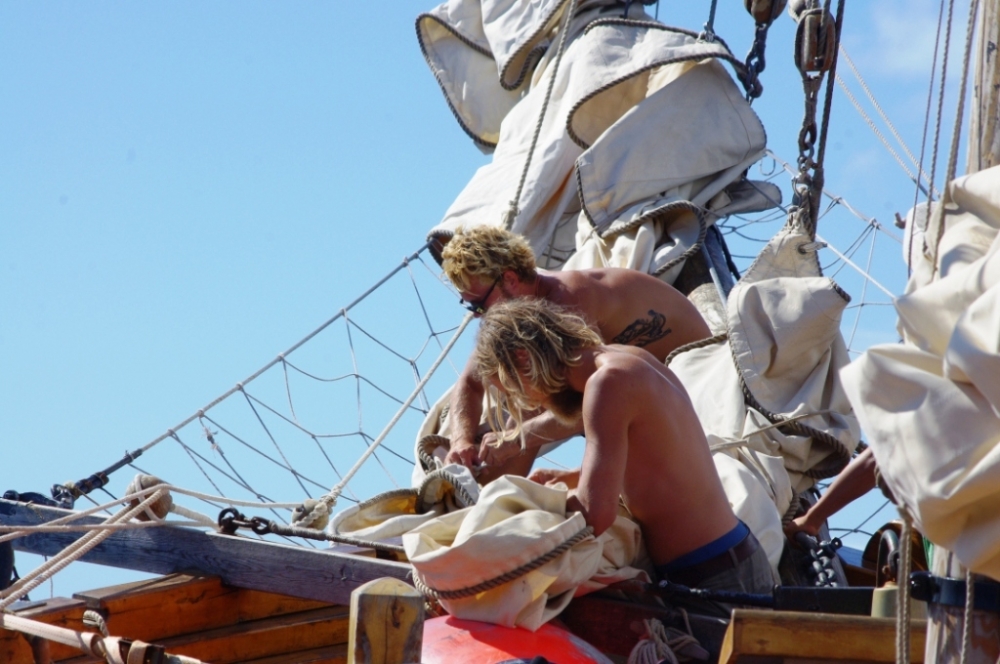 Before we go back to the harbour, the sails have to be packed in again. I use the opportunity to pretend being one of the crew members and give Siim a hand. 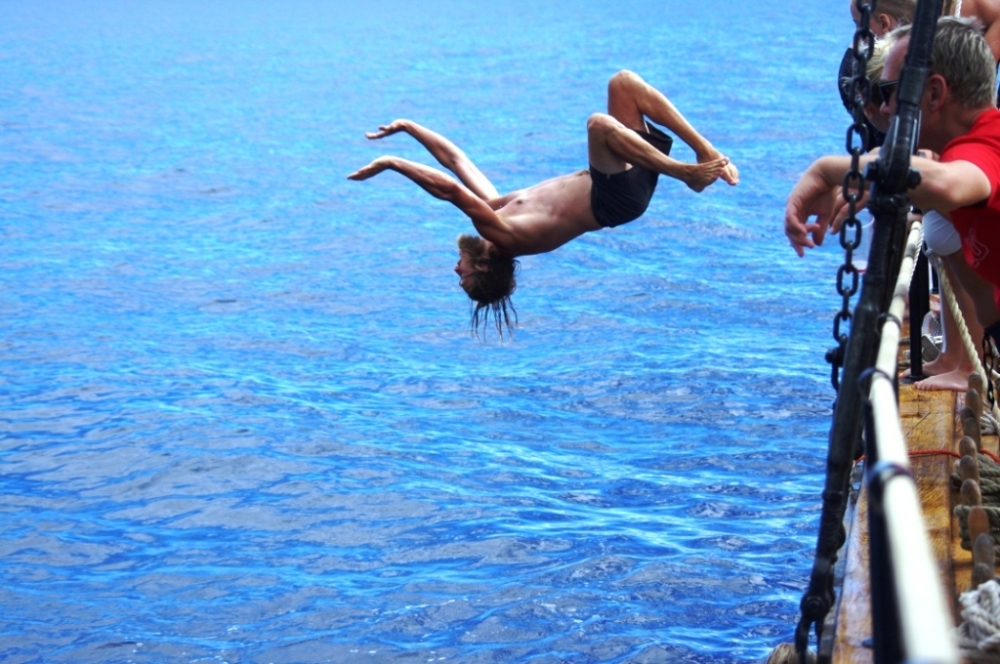 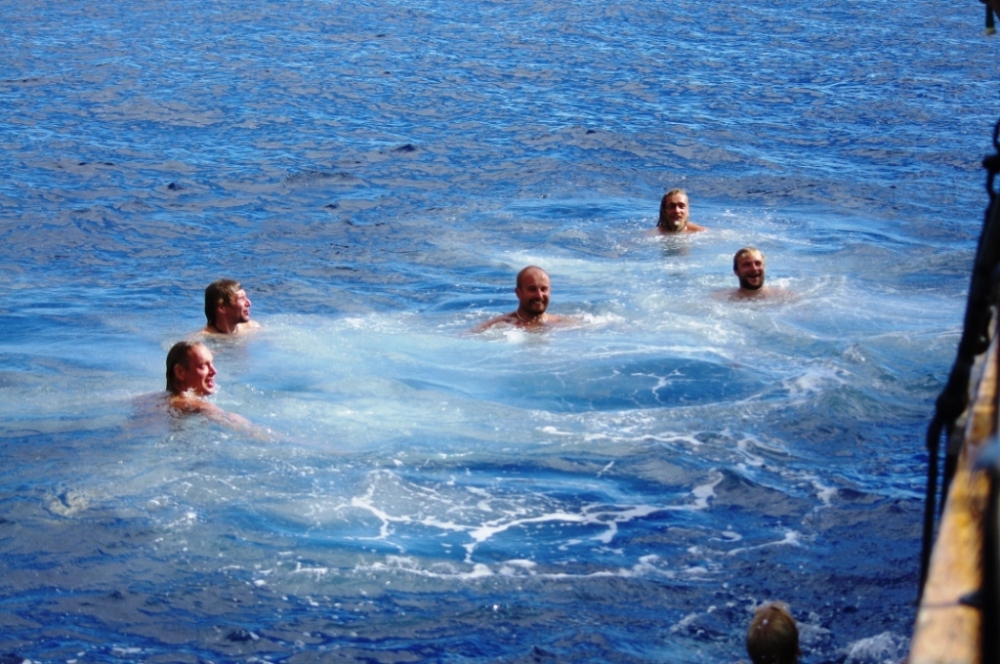 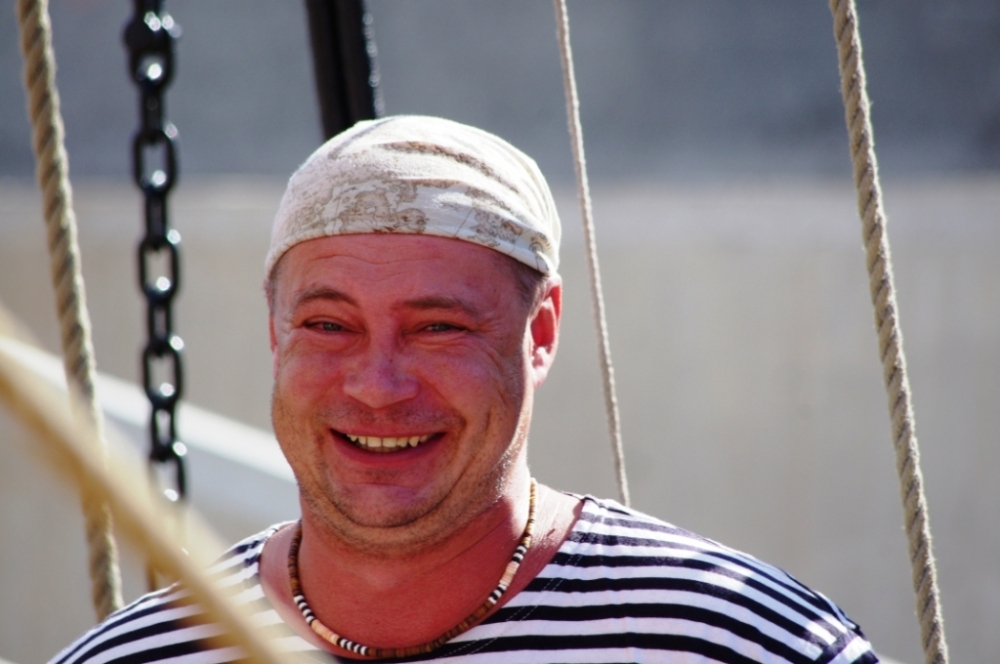 The owner Alar is more than happy to be on the boat again. He always commutes between Hoppet and his family in Estonia, because he has to work a lot for funding the boat's maintenance.

To be honest, the Estonians are a bit crazy. Of course, it is quite cold in the Baltic countries. That's why they often sauna up north. But one Estonian couple goes a bit further and brings their sauna all the way to Tenerife, towed by their car. Not that one would sweat enough here... Not even on the Canaries they give up the tradition. 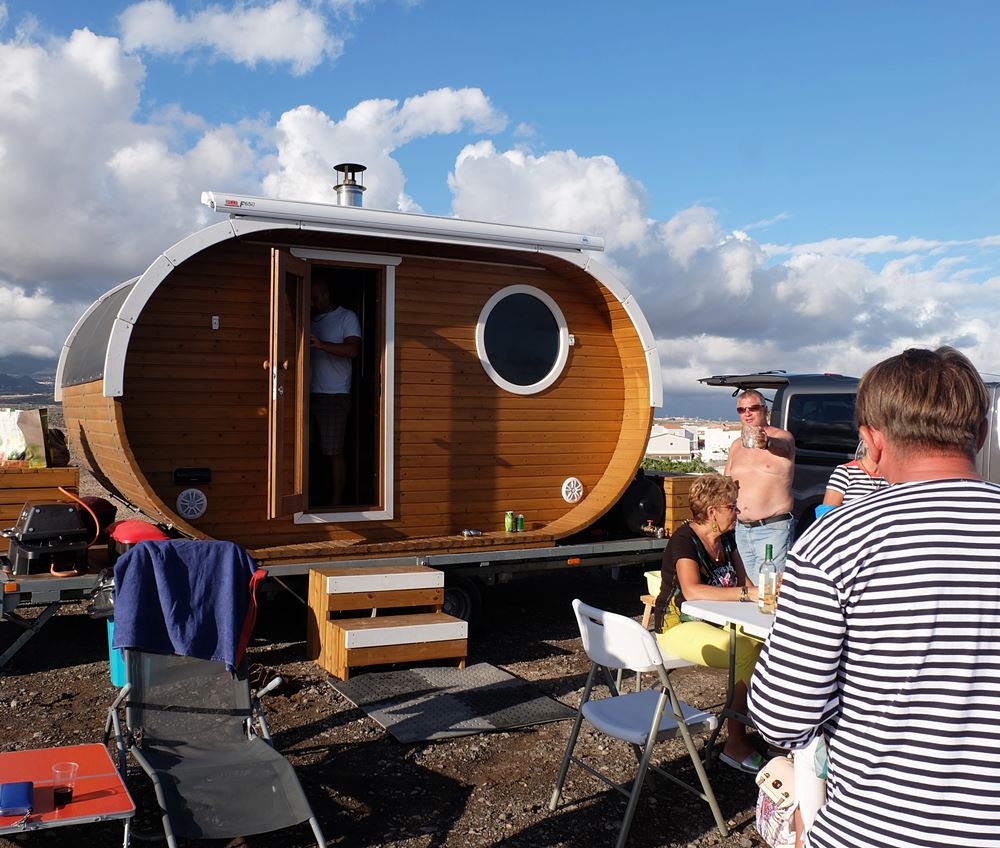 Alice is from Washington (State) and currently working on a sailboat. She is employed in a private school which sends their pupils out to the sea. The sailboat is in the same harbour as Hoppet until the end of the month, and then they will be well prepared to cross the Atlantic towards the Caribbean. Alice's friend Ivy flew from Washington to Tenerife to visit her. The two of them propose to do some hiking in a very nice place. We start from the village Masca in the mountains of the northwest coast. Then we descend through an impressive gorge of volcanic rocks. 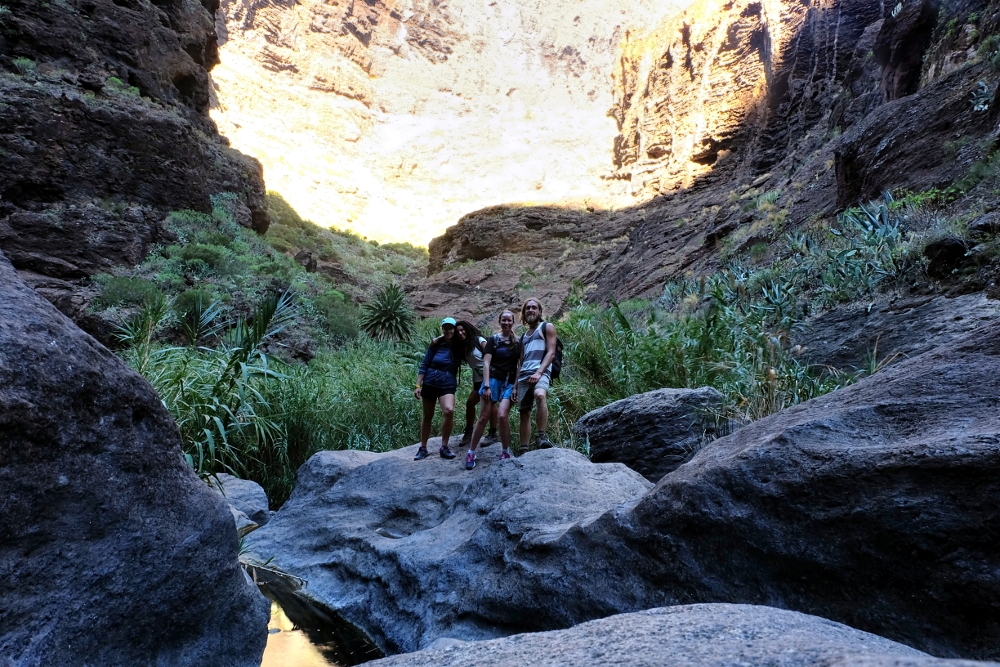 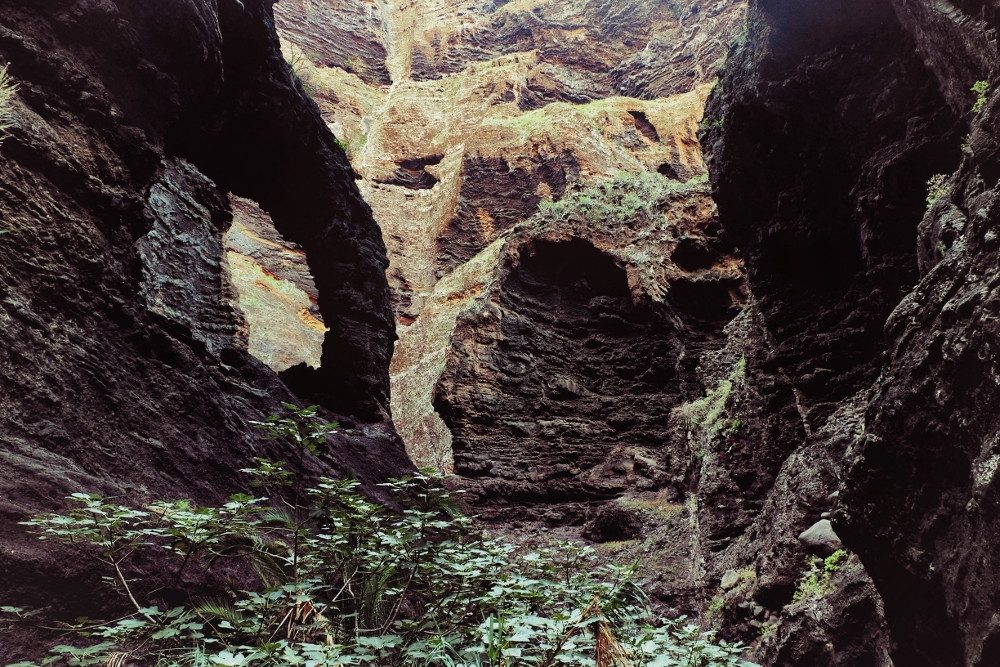 It is unbelievable how the landscape has changed in comparison to the south of the island. The clouds are coming from the north and then get stuck in the mountains, so it rains nearly on a daily basis. That's why we can pass green areas of bamboo, palm trees, water plants and moss. Big and small stones are forming rough paths through the canyon. Sometimes we even have to scramble a bit. After two hours of gazing at the shady rock formations, we reach Masca beach. 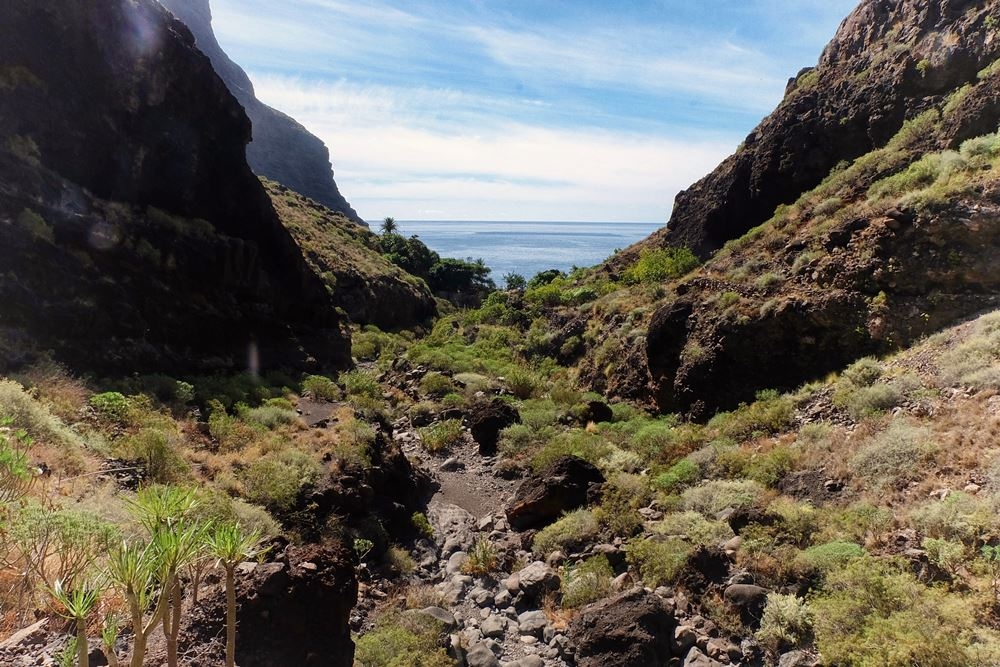 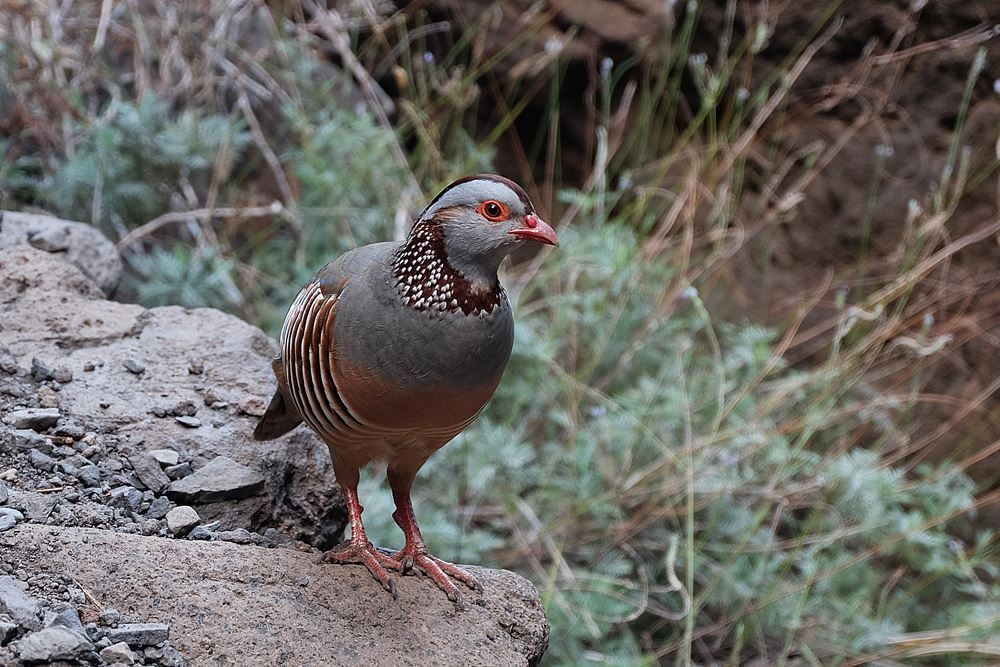 Here you can even find some of the normally rather timid barbary partridges of Tenerife.

There are only three stalls, imposing some kind of civilisation: a man, who is sitting beneath a parasol and sells fruits and drinks from a cool box; and two employees who organize the ferries going to the next city. Otherwise you can only go back by foot through the canyon.

After jumping into the big waves at the beach made of black sand, Alice and Ivy decide to walk back up to their car. Siim arrives to the beach by ferry, being the last customer on the last boat of the day. Luisa, Siim and me plan to spend the night underneath the stars in the gorge. While we are looking for a good place to stay, a Dutch man approaches us and asks if would be a medic among us. His wife broke her ankle and is lying somewhere further up the path. He had to come down for the phone reception to call the emergency. Siim and Luisa take a blanket, a mattress and some water out of the cool box without salesman and run up the gorge to administer first aid. The husband and me are waiting for the rescue team to arrive. A few minutes later, there is a speed boat coming to the coast with nine men aboard. By this time, the sun has set, so we run up the stony path equipped with head torches. Meanwhile I am thinking: "That's quite a fast pace and not the best conditions, since it just started to rain. It's good that I'm running with paramedics, so they can take me with them on the boat, if I break my ankle, too.

One evening, we take the car that Hoppet's crew was renting and have a look at the bins from the big supermarket chain "Mercadona". We come back with the whole boot loaded with tons of good food. We found 35 kg of oranges, many more fruits, bread, pasta, rice, salt, etc. It's just disgusting to see what they throw away every day and wouldn't be eaten: 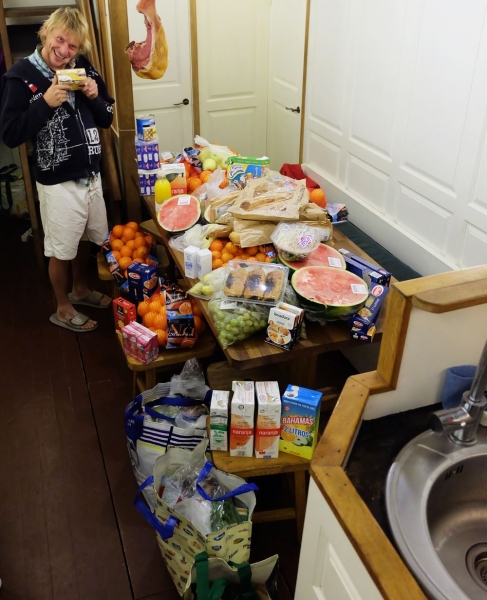 Luisa and me stay aboard the Hoppet for 15 days. We learn a lot about Estonia, drink quite some rum, cook, dumpster dive, and have so much fun with all the Estonians. Every morning we jump into the sea together with Siim as a little refresher, and the evenings are mostly quite long. We make music and work on the boat. 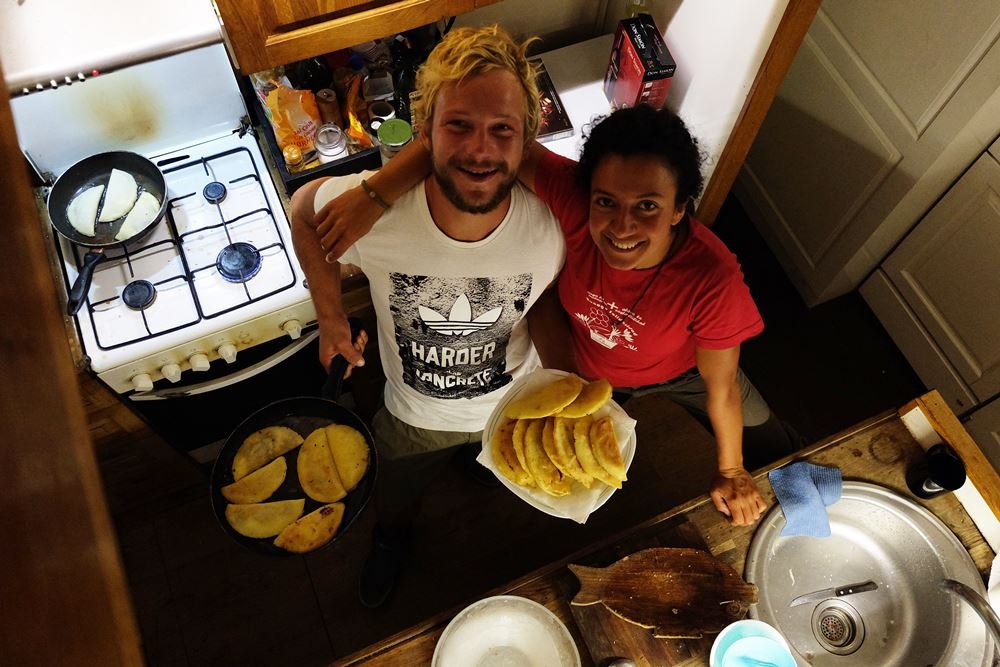 Luisa shows us how to make proper Colombian empanadas. 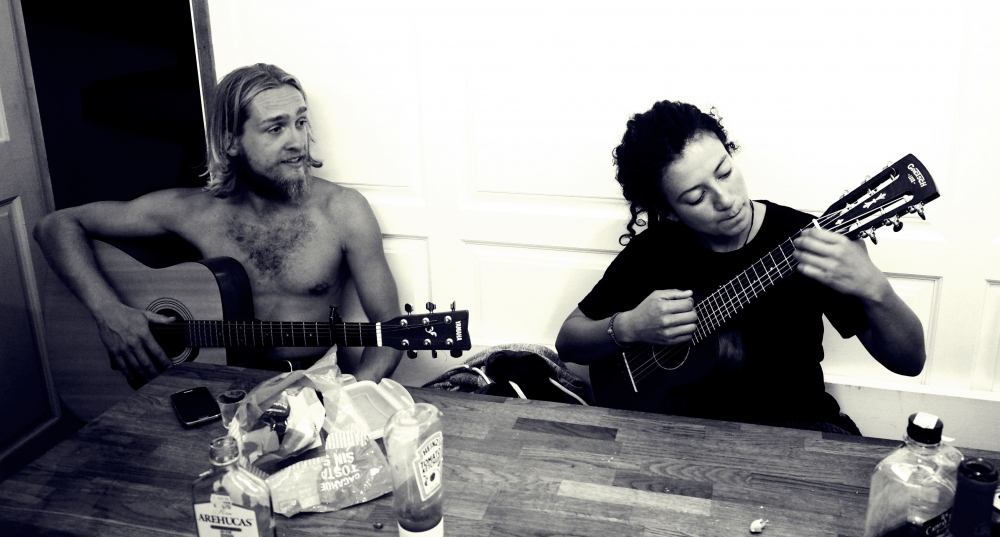 This is where we part company. Luisa and I have been traveling together for six weeks. It was a great and intense time. We learned very much about us and the other one's culture. It would be nice to find a boat that takes both of us across the Atlantic, but there is a feeling inside me that makes me want to travel independently for a while again. But before I look for a way across, I want to explore the island La Gomera a little bit. So I am asking around at the harbour, if anyone is sailing over...