18 days of Water, Waves and Wind 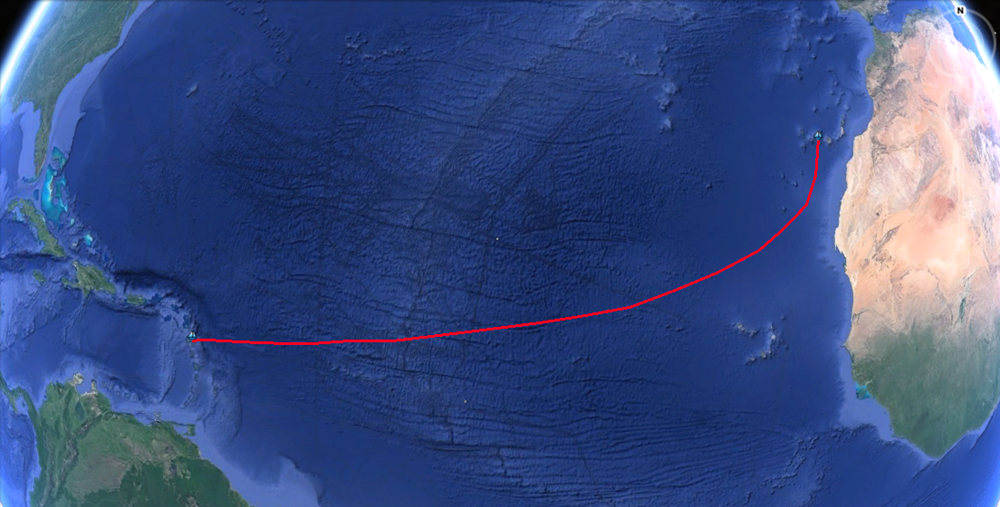 28 January 2017 - the day of departure. After stowing away all supplies and 240 litres of drinking water, Alejandro and the crew from the Hoppet are waving us goodbye at the marina of San Miguel. 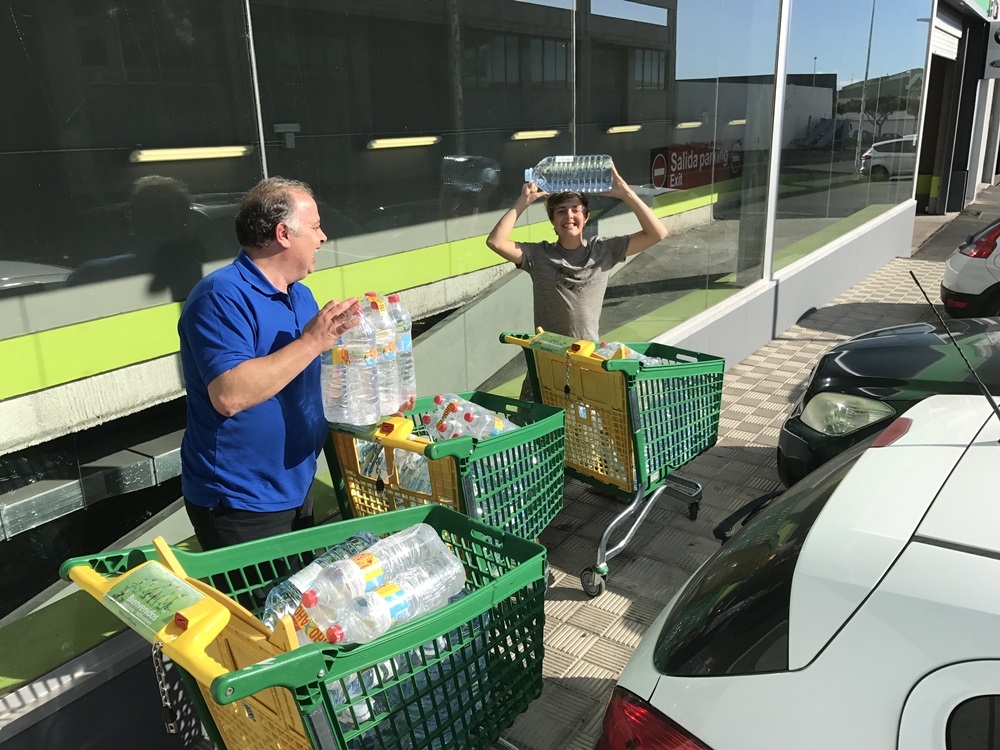 Alejandro gives us a hand with the last errands that have to be done. Thank god he has got a car!

So they let us go onto the great ocean. From now on we shall save water and electricity aboard. Right after leaving the harbour, we set the main sail and the genoa and take the course down south. 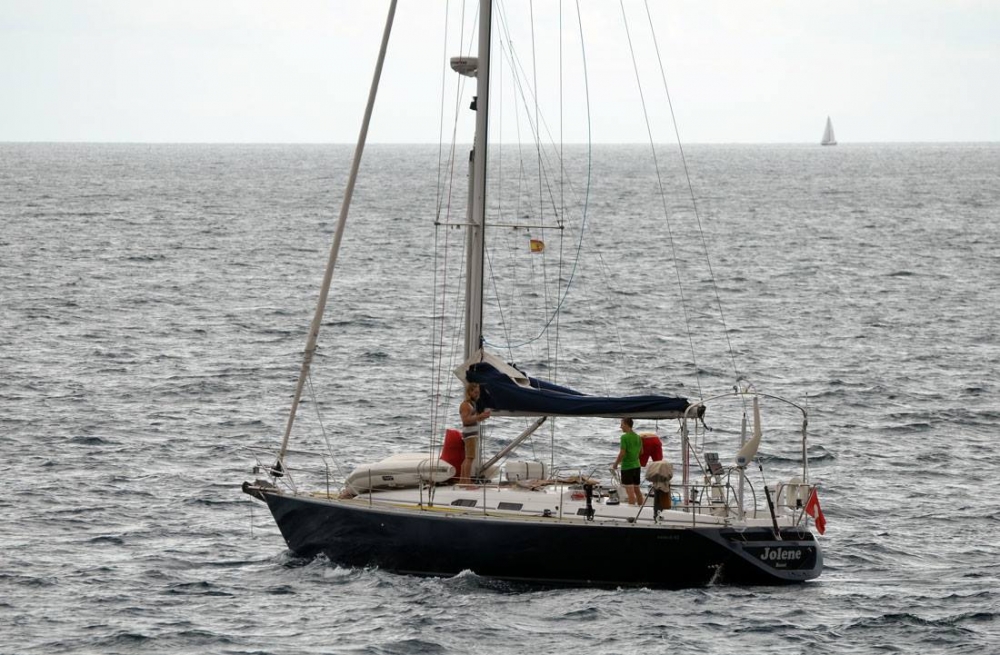 In the beginning, it feels like every other sailing trip that I have been to during this journey. I still can't fathom, that in the end, we will reach the "New World". But soon it will be clear to me. The winds decrease and so we set the spinnaker. Due to the fact that our captain Berni has been sailing a lot of regattas, I can learn a lot about manoeuvres and navigation at sea. Now I know what to do when someone calls "haul tight", "veer" or "reef" and what the words "genoa", "boom", "rigging", "halyard", "winch" and "downhaul" mean. 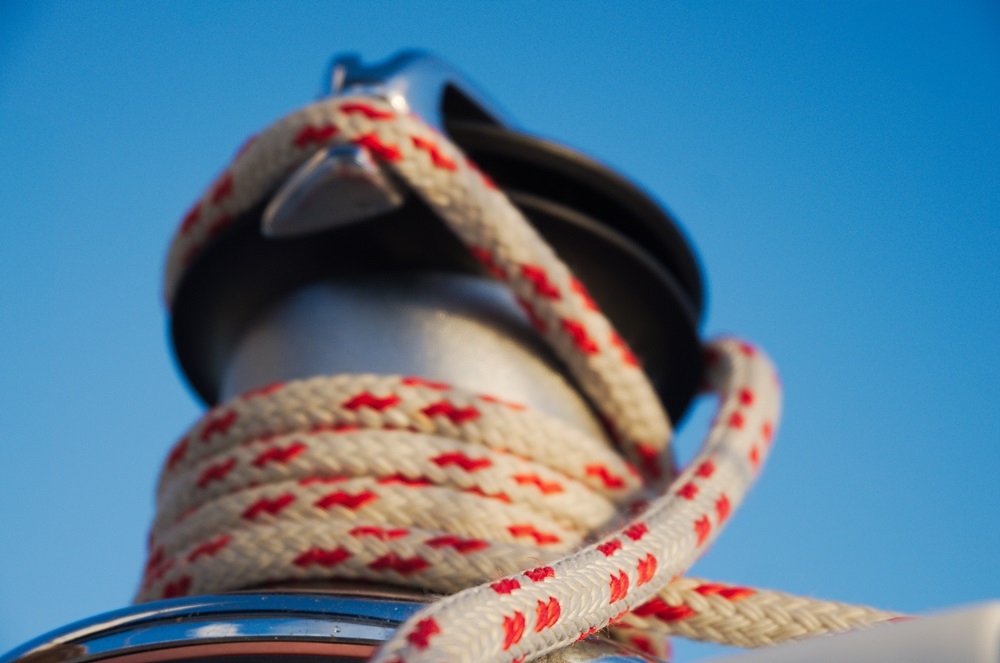 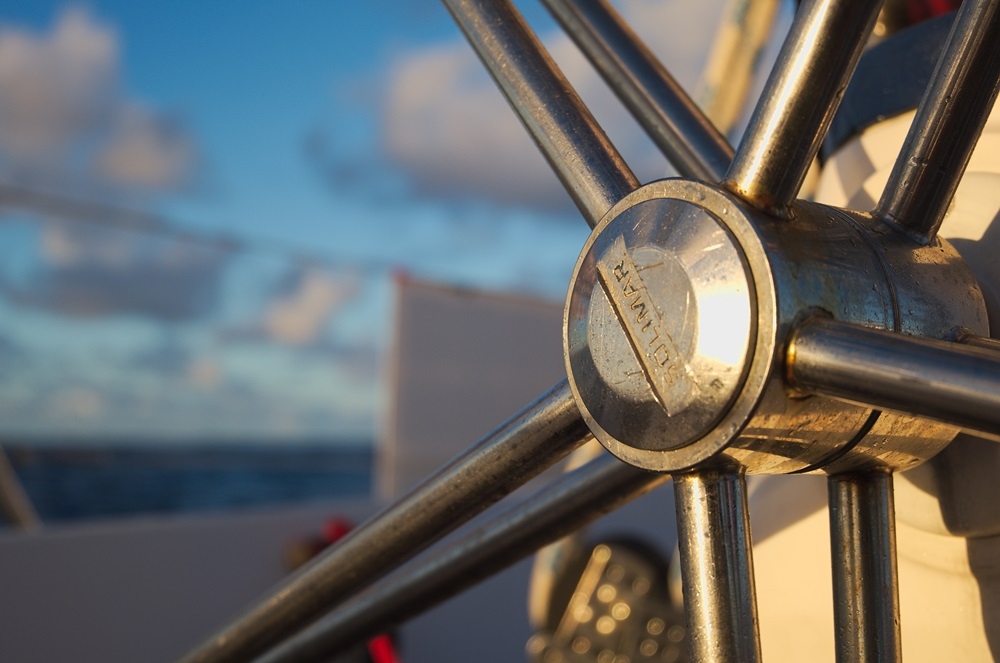 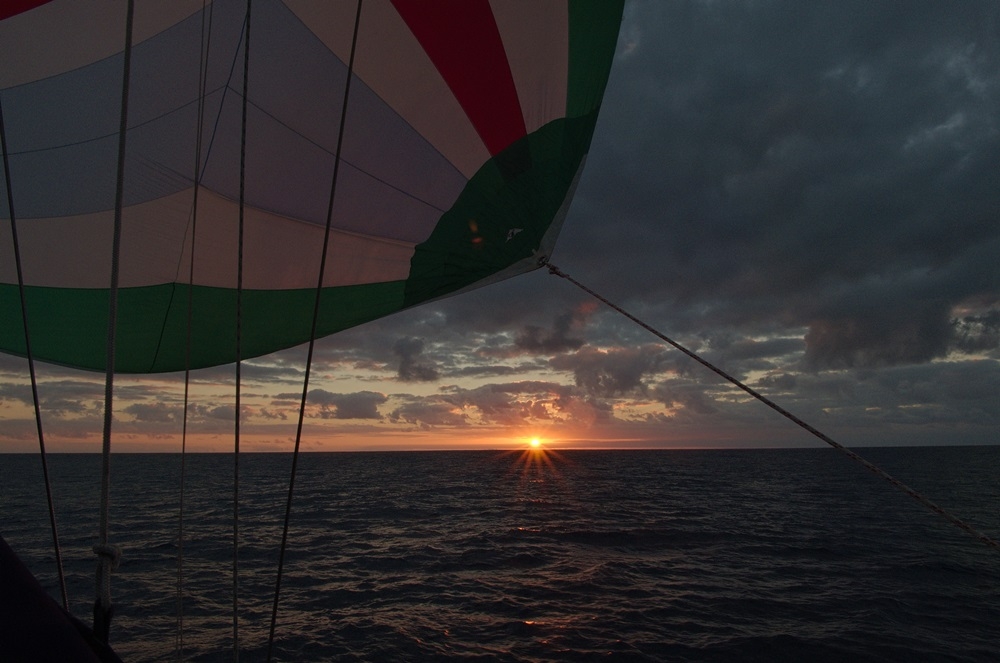 During the first nights we still wear jackets, scarfs and hats. But the further we sail south, the warmer it gets. The wind is increasing and so we set the genoa to take us a few thousand kilometres towards the Caribbean. In the beginning, Marianne and I are responsible for feeding the hungry mouths everyday, because Joshi is still feeling a bit sea-sick.

Since we are a crew of four, we only have be up for one night shift of three hours each. Although that means, that we have nine hours of sleep every night, this amount of rest is well needed, because winds are rocking the boat to and fro. The waves reach a height of three metres and make the work on board more and more difficult. So we resign ourselves to read through the whole day. Only if necessary we cook, do the dishes and write down the log. We also try out other exercises to create a bit of a change during the long lasting days. After Marianne and I realised, that it is impossible to do yoga aboard with all the waves, we dedicate our free time to other tasks like playing the guitar, painting, taking photographs and, of course, the never ending maintenance work of the boat. For example, one time we set the Spinnaker again but then it suddenly went off the mast. The shackle bent open, so we had to exchange it but therefore we needed to get the line down from the top of the mast. And that won't work without a proper climb, hehe: 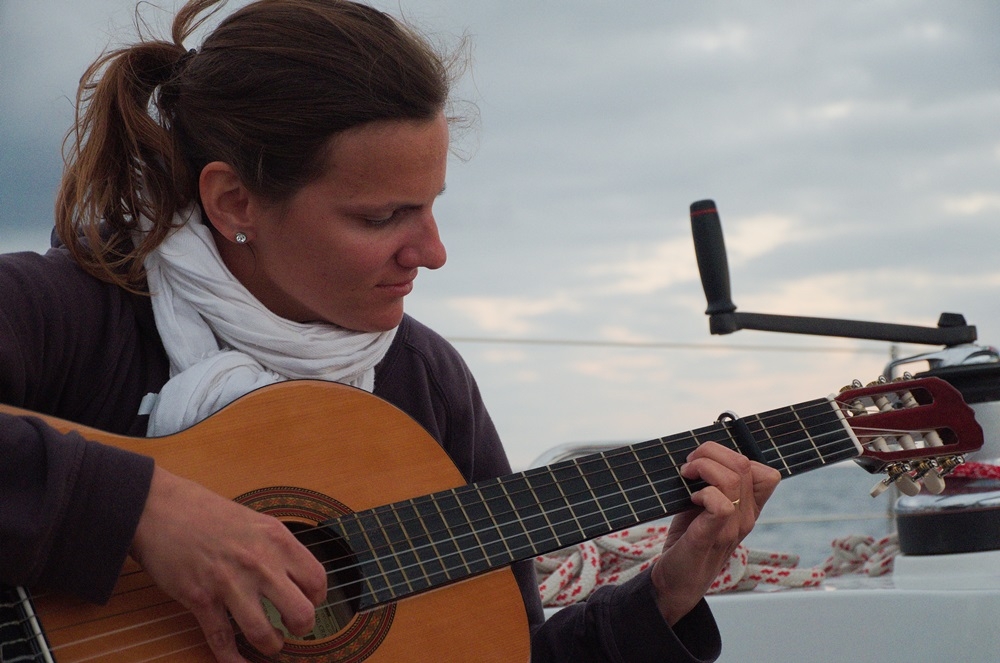 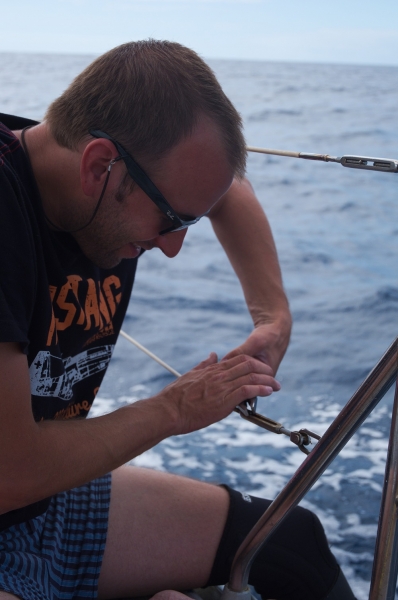 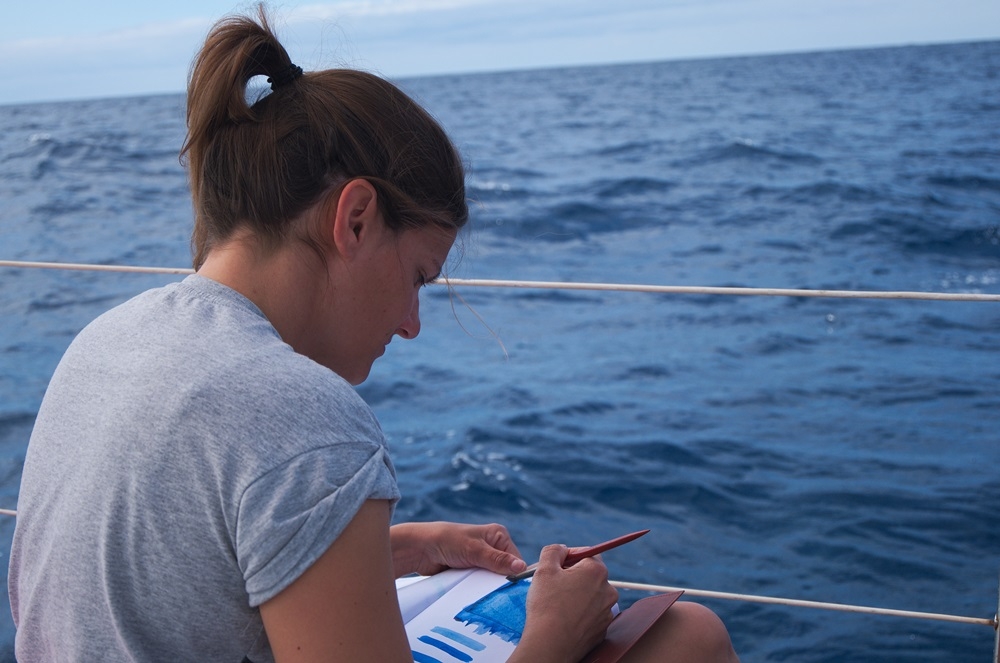 Another special occasion is Joshi's birthday. We even manage to bake him a chocolate cake and Marianne and Berni give him a special present: he can call his family with the satellite phone! 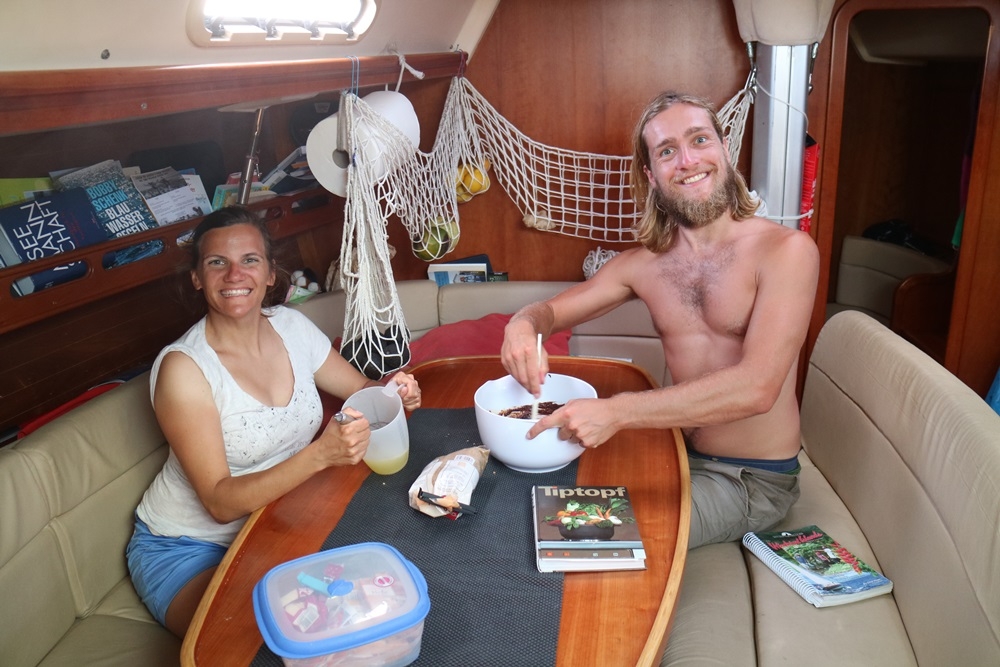 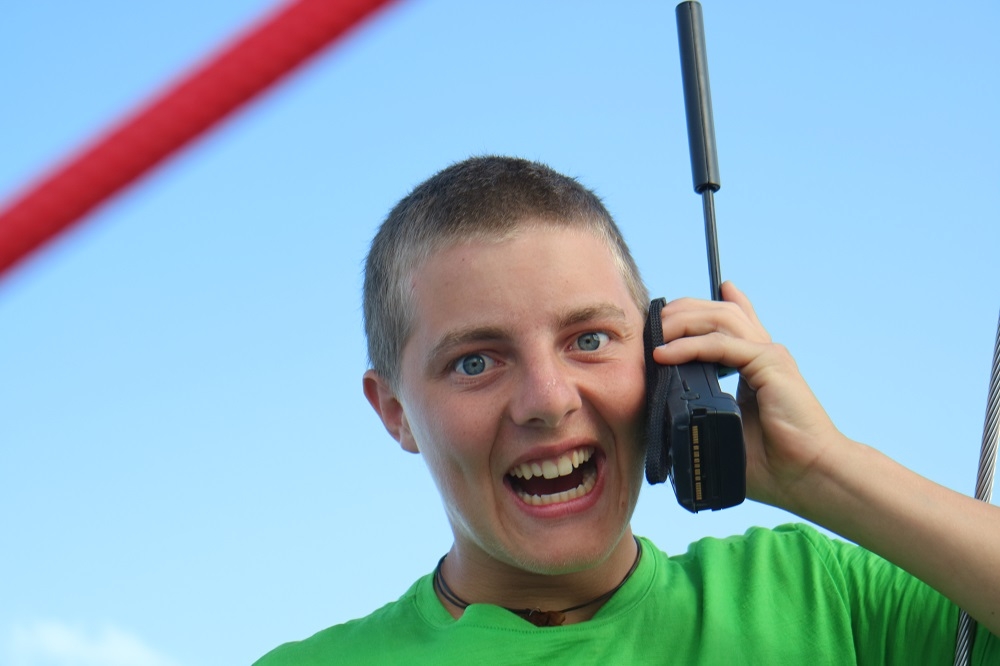 We are sailing for one week now and it is still not possible to go for a swim. The waves are just too high. To keep a fairly decent level of hygiene, we come up with a water-saving, manually driven sweet water shower: 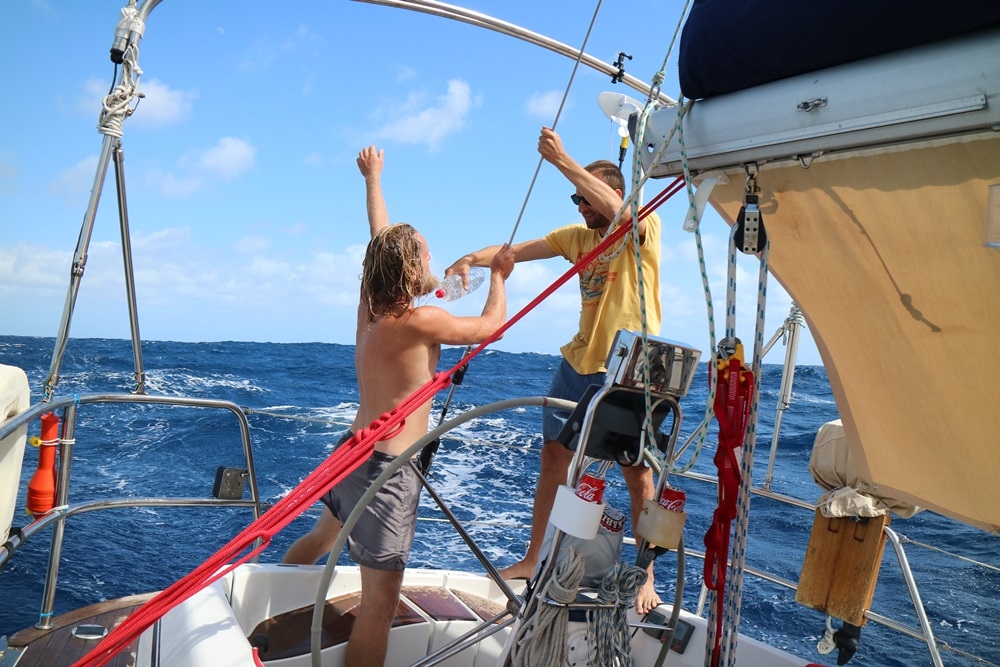 Fortunately I can't have enough of the amazing formations on the sky. Two times a day we get rewarded with amazing sunsets and sunrises. Every couple of days, during my night watch, I get this feeling of complete happiness. Is it true, that I am living my dream in this very moment? I have been waiting for it for two years. Now it is finally here and it is lasting so long. It is a long way from Europe to America and I have the chance to experience it. Both, in its entire force and beauty. 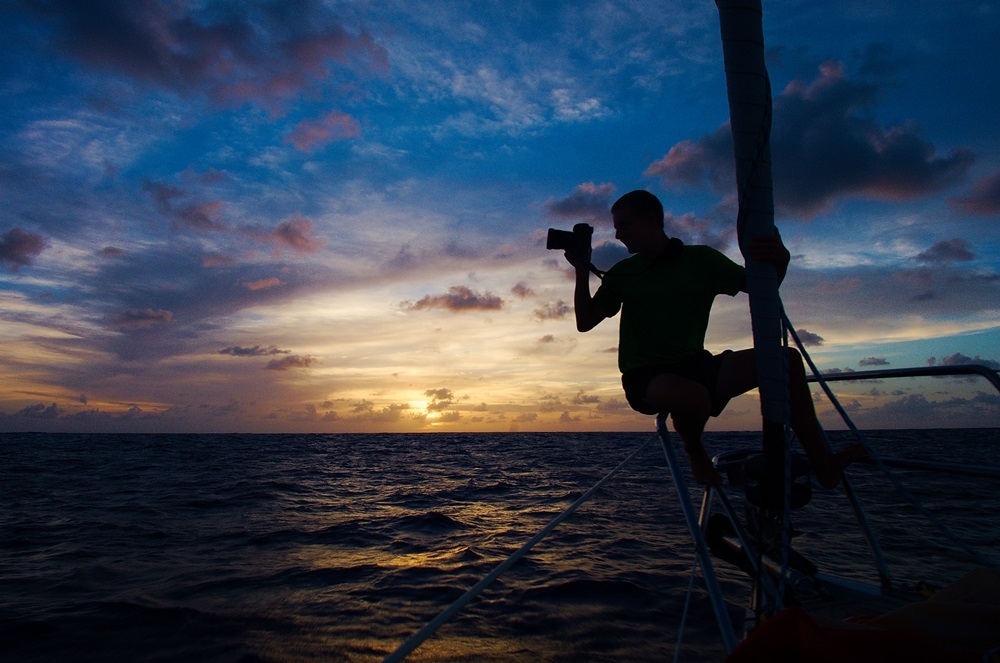 The winds become lighter again, so we set the spinnaker. You can really only use it for light winds, because it can't bear more than 20 knots. But out of the sudden, the wind speed rises and we don't have a chance to get the sail down soon enough. We can hear a big scratching sound and see the sail flying around randomly in front of the bow. Damnit! But Berni stays very calm and tells us what to do. We haul the spinnaker aboard and turn on the engine. The problem is, that the halyard is stuck together with the leftovers of the sail at the top of the mast and has to come down to the deck. So I can go climbing again! Yeeeaaah!

Now all the parts are down. The next day, after having processed the shock of a broken sail, the two boat owners sit down and begin with the repair work. The probability of successfully repairing the sail with the few tools we have on board, is, to be honest, rather small. But one thing we have more than anything else: time. Enough time for trial and error. 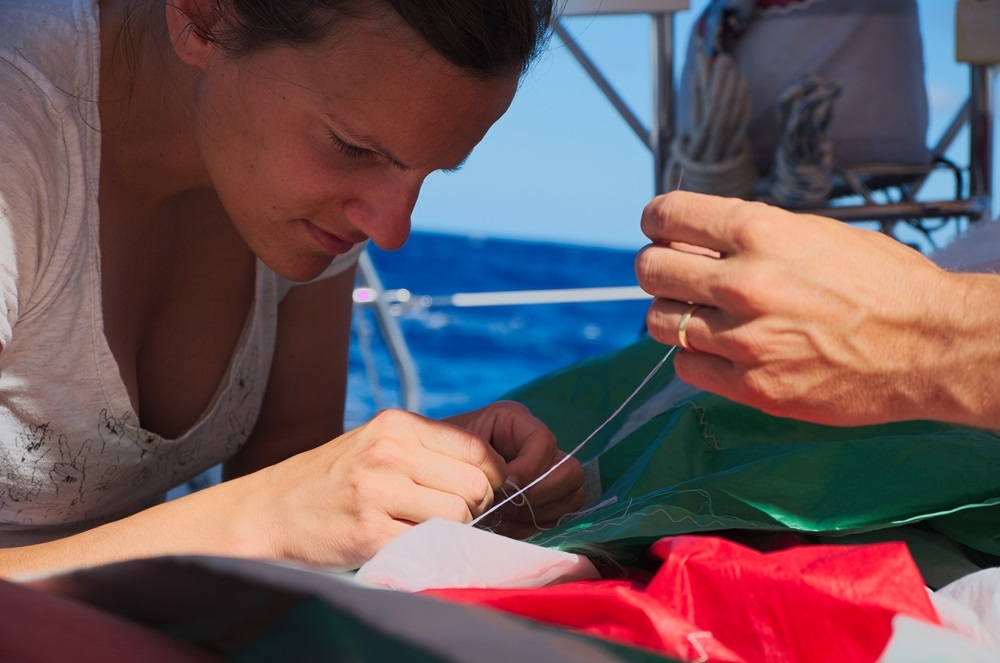 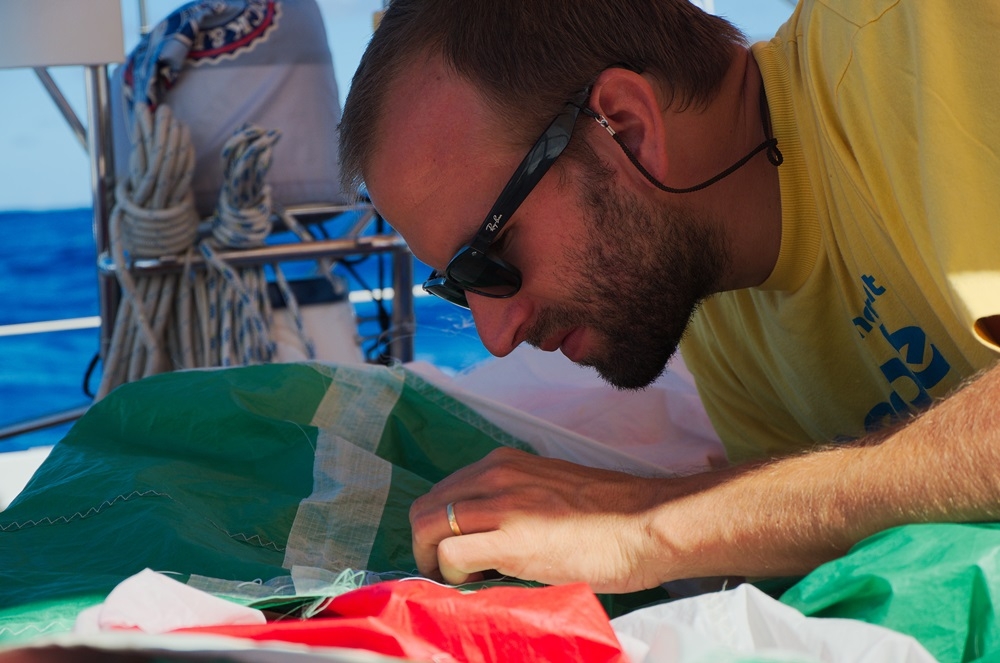 In the meantime we set the genoa and Berni and I are improvising a bit, trying to build a second genoa. It looks funny and doesn't really help pushing the boat forward, but, as I mentioned earlier, we had the time to do it, so we did it. 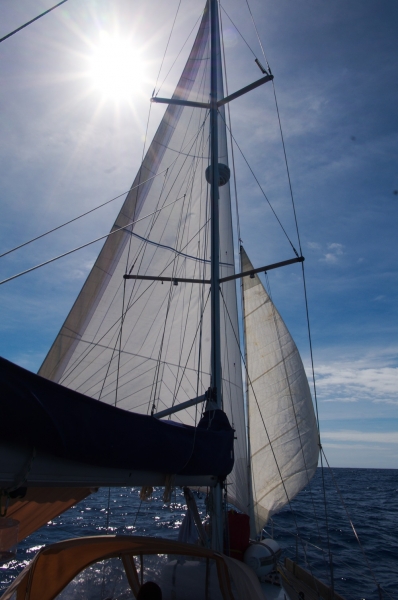 The next morning, we replace this questionable construction with the repaired spinnaker. We are all very excited if it would even survive hauling it up. And actually, it does! Although you can see a few "traces of usage"... 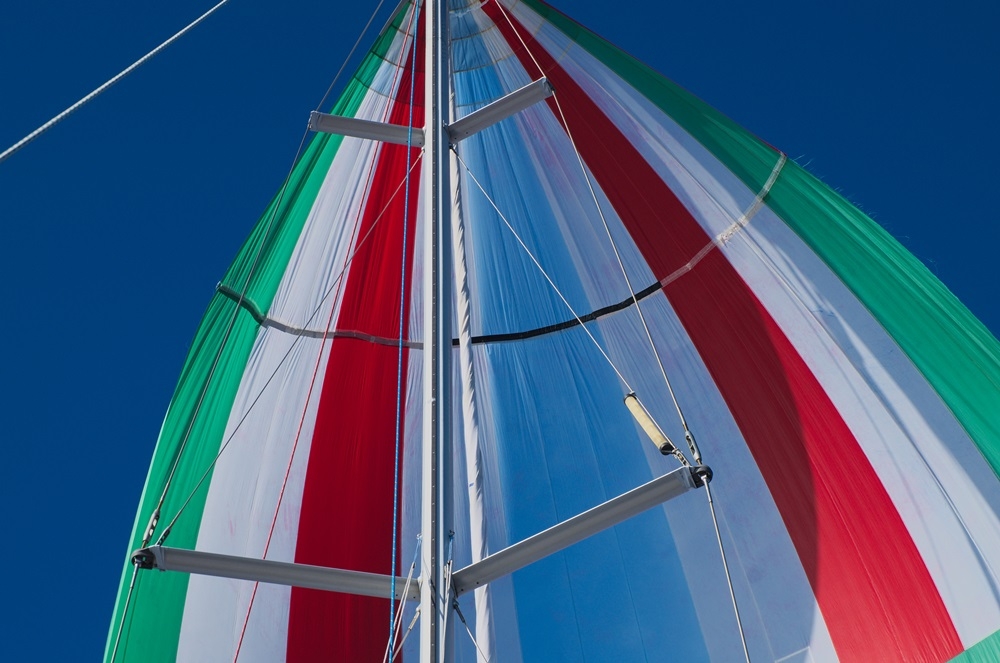 With a mix of wonder and pride we praise the holy sail and stay astonished for the next one and a half hours. Then the seal begins to crack. So we put the whole thing down, repair the small crack with an even better needlework and hoist it again. The sail lasts for two more hours but then starts ripping apart at another spot, so we have to face it: let's take it down and stow it away. We can't do much more without a sail maker and his tools on board. So that means: staying with very little wind for the last few days.

It is not hard for the crew, since it simplifies the cooking and helps to get a decent sleep without being rolled from one end of the bunk to the next. Only the captain is not happy at all about the situation. He is used to fast and efficient sailing and now his beloved spinnaker betrayed him! But we manage to keep him in a good mood and can even persuade him to finally take a break for a dip in the sea.

So the days pass by. Joshi has long been over his sea-sickness and we are all acclimatised to the weather and being surrounded by water all the time. The nights are becoming calmer, because the waves are now flat and long instead of small, steep and jumpy. The sky is also changing, the further we go west. One evening we can make out a fiery orange in the west and a surreal looking mix of pink and light blue in the east, just by turning the head around. 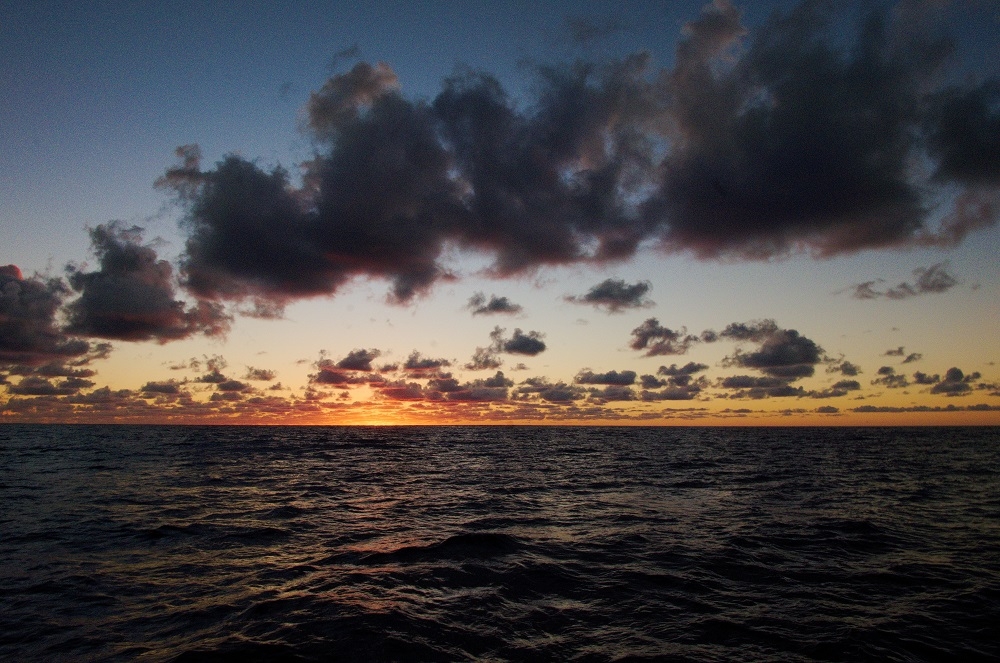 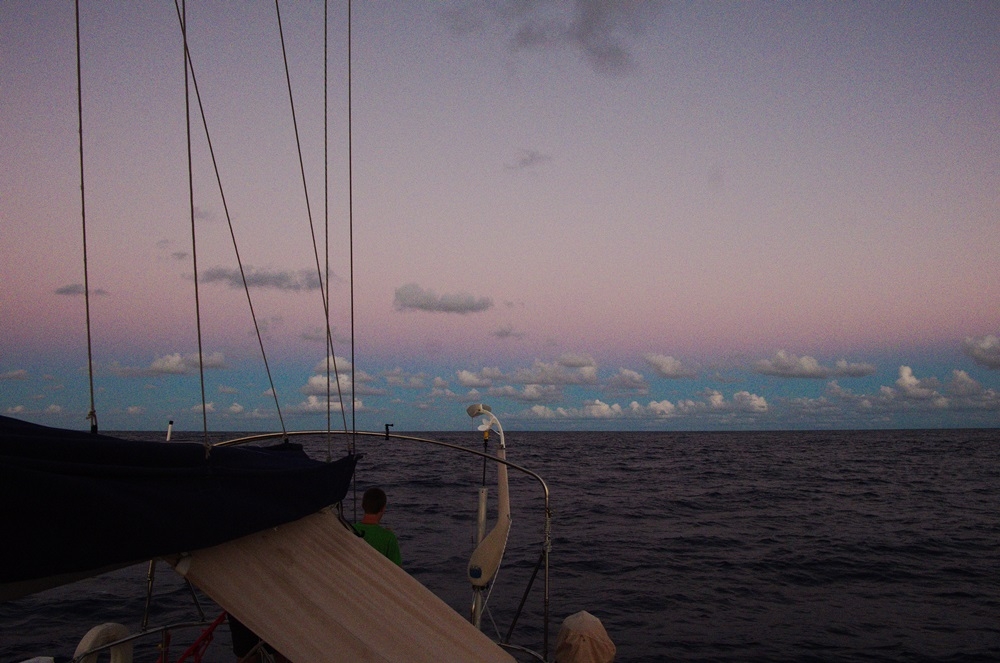 The signs are obvious, and just a few days later it is happening: La Désirade's silhouette is rising from the horizon around midday. LAND IN SIGHT! Not long and we are already sailing along the pretty coastline. I can't get enough of the cliffs, beaches and palm trees. 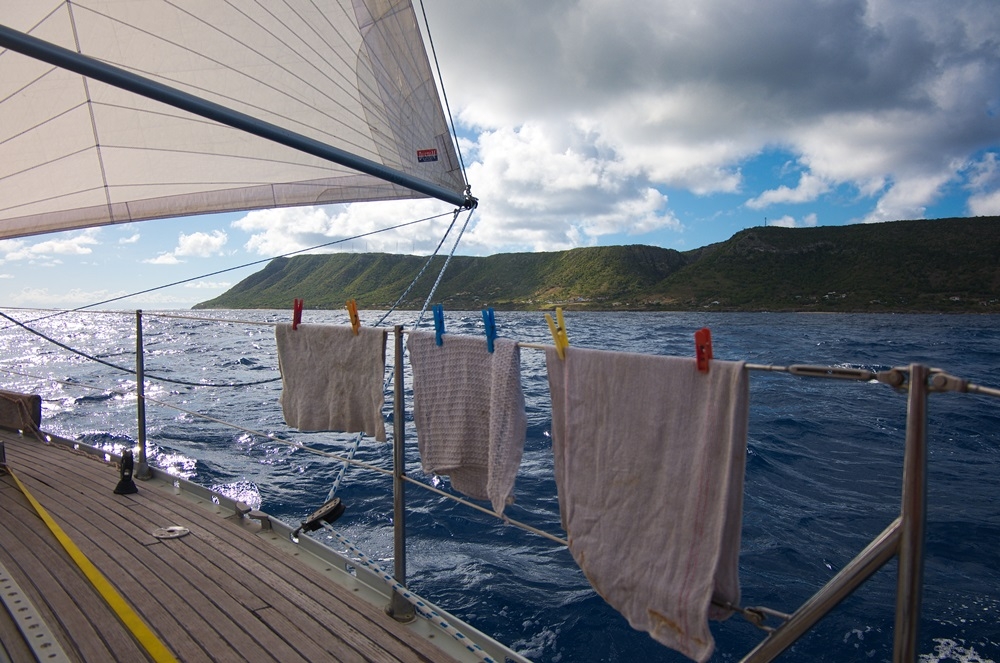 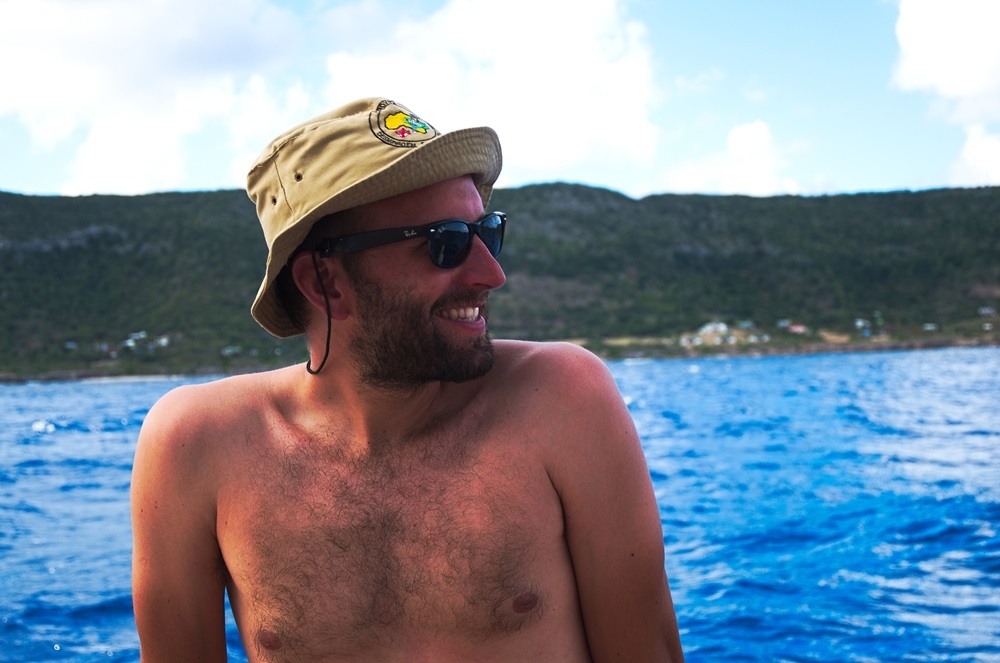 Unfortunately, there is no good place to anchor at the island, so we drive further west to one of the biggest islands of the Lesser Antilles: Guadeloupe. It belongs to France, so it is easier for us to clear in. We can even pay with Euros! All's well that ends well. And now, shore leave for the sailors! 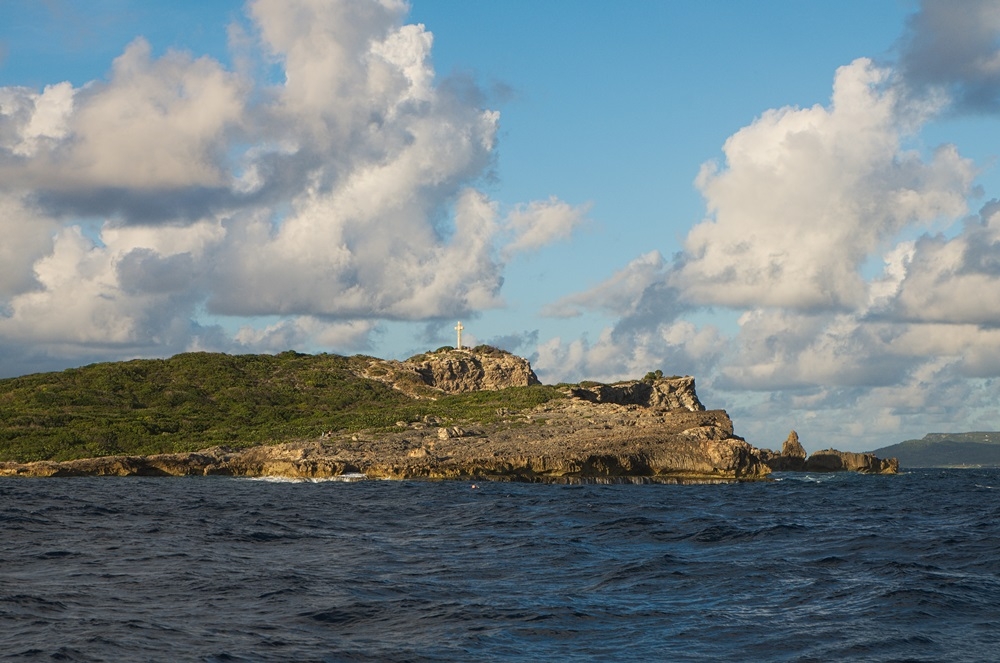 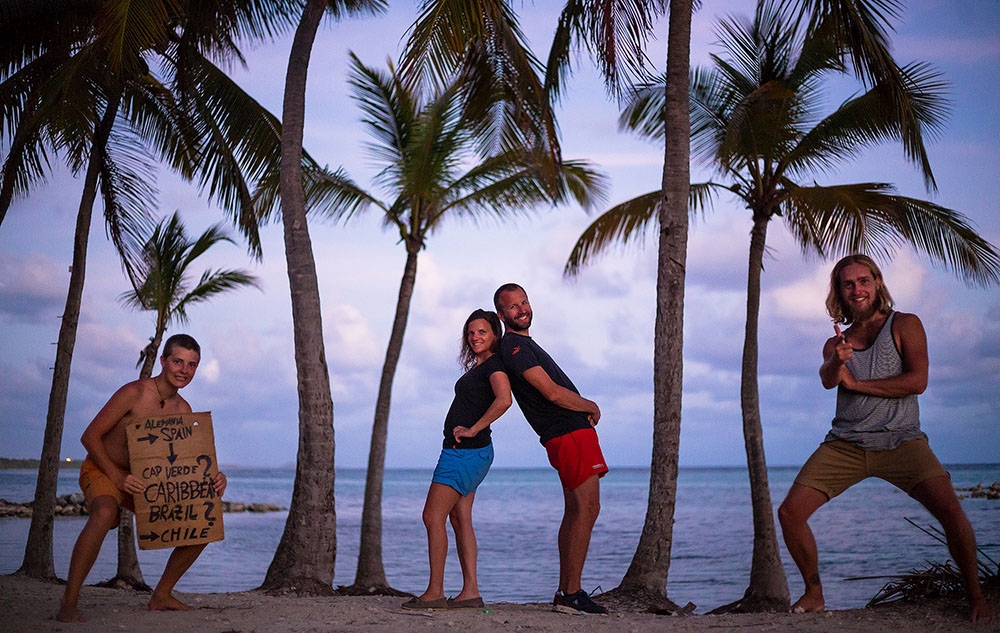