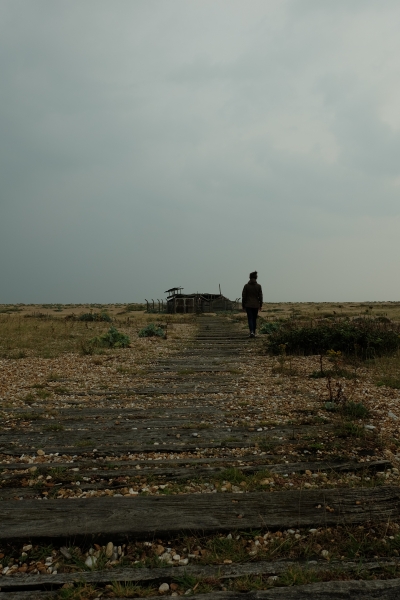 Somehow, Great Britain had become a kind of first big mark. So we stay in Lille, being in good spirits, raising our thumbs towards the sun. After one hour we change the position, a while later again, and again, and again...

Five hours have passed and we are nervous wrecks, haven't moved one meter. How the hell could we ever make the way to England, if we don't even reach the coast? Two boys stop by - but they don't go into our direction. Despite they can't help, they cheer us up and give us useful connections for a place to sleep (just in case). And finally, after six solid hours (our personal waiting record) a Frenchman takes pity on us and gives us a lift directly to Calais. By help of gestures and primitive french we try to ask him if he could drop us off at the last petrol station right before the tunnel. Self-confidently he affirms but in fact he didn't understand a word. Indulgently he stops directly at the tunnel entrance where passengers are prohibited to go. So we stray in no-man's-land, it's miserable; refugees have to hide in awful places. We just feel so false being privileged Europeans with accidently beneficial passports. In the same moment we are treated friendly and cooperatively by the policemen, they turn around and scream at the migrants - although we are being tolerated at the exact same place. Everyone tells us to be aware because of the refugees... and yes, we are kind of scared, but why? We really don't know and afterwards we feel ashamed for that.

In the evening we decide to hitchhike back to the city centre of Calais to spend the night in the train station and an old Italian Signora picks us up. Arriving at the station we ask two nice guys for a place with free WiFi. We tell our story and invite us to sleep at their place. They are called Alan and Amelie and have travelled themselves a lot. Fortunately, this weird day comes to a great end, so we gather courage. Further on, both of them were involved with the migrants, helping them and they give account on the whole situation with the police and the media. These are no good stories. Amélie tells about inhabitants donating tents to the refugees. Later the policemen come, urinate on the tents, destroy them and throw the away. She tells about officers turning on very loud music to awake the migrants rudely in the middle of the night. She says:

It feels like for 20 years now our government and the actual mayor of Calais have been trying to deny the reality of migratory flows. They have been investing a lot of money into security, repression and fences aiming at pushing migrants out of the town with no results. When I meet migrants in the street, men, women, teenagers and babies, I feel ashamed of being European. We are claiming being the country of the Human rights but when I see how these people are treated by the police, how they live in the jungle [note: the wasteland around the Eurotunnel] this makes me feel sad and powerless in front of this very complicated situation. Maybe it is time to change the strategy and approach the situation with a more human point of view.
Many have sounded the alarm and have daily reports of what is going on. It is worth to have a look here:
Calais ouverture et humanité (fr)
Calais Migrant Solidarity (en)
Passeurs d'hospitalites (fr)

Lastly, the next day Alan and Amelie bring us to the ferry port where we find a lift to Dover. Tom and Anahita come from Wales and Dortmund, living in Leipzig now and have exciting stories to tell. Attended by appropriate music we finally reach British ground and are grateful for everything we have experienced. But still there is this incomprehension: How can someone be so disgusting and rude against people who survived war and escape? We, who are leading a comfortable life at their charge...